How to share my card using a QR Code?

Written by Joe Lytton
Updated over a week ago

Sharing your card using a QR Code is one of the simplest and fastest ways to share your card.

Once you tap the 'share' button at the bottom right corner of your card, choose the 'QR Code' option. 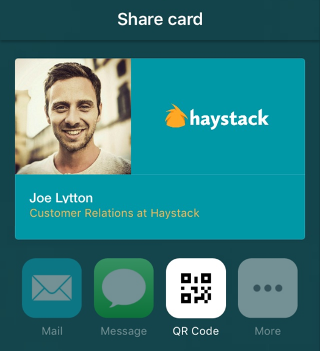 Once the QR Code is shown on your screen, ask the recipient to point their camera app, Haystack app, or QR Code scanning app at your screen's QR code - your card will quickly load up on their device - magic!

Please note: While this method is fast and easy, you need to make sure the recipient's device has an app that can scan QR Codes. As a general rule:

Did this answer your question?